It’s the new year so a lot of birthdays are coming up again. The first birthday I’ll celebrate this year is none other than my BFF. Last week was her birthday and to add a personal touch on top of the gift, I made a little card. 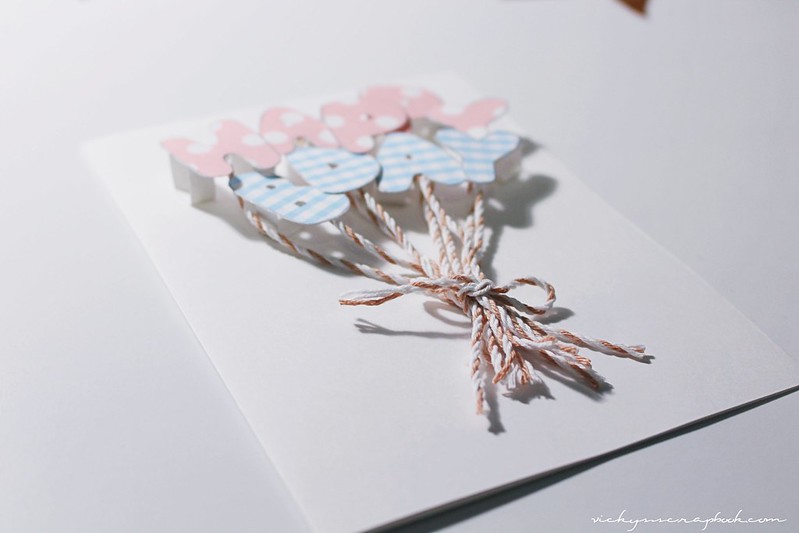 I tend to make most of the cards I give with gifts, especially in the last couple of years. I really wanted this one to resemble balloon letters but with a more colorful twist. I really enjoyed complicated pop up cards a few years ago but lately I really like simple white cards with a pop of something.

I began with one small sheet of white cardstock paper that’s folded in half to be the card. Then on the back of some scratch cardstock paper, I drew in the letters backwards and cut it out.

With some left over twine from my previous dreamcatcher DIY, I taped one small strip onto each letter. Then, I cut out a small short strips of cardstock paper to use as the “stand” for the letters to pop up; they didn’t have to all match the same size to give the balloons variety when you tape them onto the card.

I folded a small section of the strip before folding it into halves twice to create 5 sections; once I fold it into a cube, the smaller section is where I place the double sided tape and taped it onto the back of the letter. I repeated again until all the letters have a “stand” and I could proceed with arranging and taping them onto the card.

Once I taped and arranged all the letters on the card, I tied all the strings together and taped it in place (I placed a small piece of double sided tape on the back so it’s not visible). The card is now complete!

Do you like to include greeting cards with your gifts?